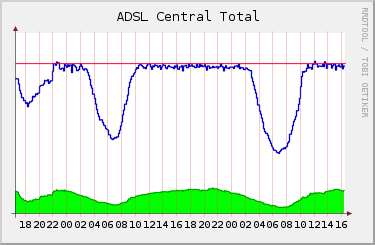 Over at Entanet the BT Central capacity has been sweating this weekend, it was running at capacity from 10am Saturday through 2am Sunday, then the late risers of Sunday morning brought it up to capacity at 11am where it has been sat up to 4.30pm when I'm writing this. A perfect illustration of the demand expanding to meet the supply when there is no constraint - Entanet's 300 GB off-peak allowance is effectively "no limits" as only a few % of their users could ever get 300 GB/month in the available off-peak hours.

It is interesting to observe the total load on Entanet's ADSL broadband connections via their on-line monitoring. This also shows the expected maximum rate for users on each of the BT Central connections feeding ADSL traffic into Entanet.

Entanet (via their resellers) offer a range of packages with fixed GB/month limits for example 30 GB/month peak / 300 GB/month off-peak. To get 300 GB/month would require the user to average 2 MBits/s through the off-peak period so in reality this is only available to a very small percentage of subscribers. "Off-peak" starts at 10pm and the surge in load is clear from the graph, usually taking until 2am to return to its pre-10pm level :- 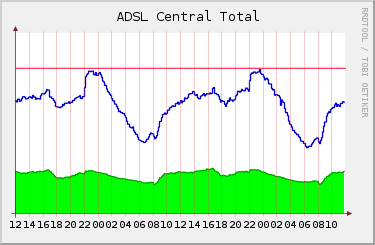 There is clearly a lot of unused capacity in the 0200-0800 window and its a pity the downloaders that fire up at 10pm don't use scheduling software to exploit this slack period. As things stand Entanet use an "anti-loss tool" to throttle the individual connections down to 2 Mbits/s in order to avoid packet loss when the 10pm surge occurs.

Another interesting aspect is the fairly consistent upload (green) trace, running at about one third of the maximum downstream capacity. If this upstream traffic is capacity limited, as seems like with Asymmetrical DSL,a change to faster upstream speeds or to symmetrical technologies like FTTH would see a large increase in demand - possibly exceeding the download demand.

It seems widely acknowledged that Windows has some design issues and Microsoft has some QA issues that result in a fairly significant stream of security problems and fixes with Windows operating systems. Combine that with its dominant role in the market place and the loathing of Microsoft that can be found in some quarters and the net result is a fairly toxic security environment with legions of spammers, hackers and malware creators doing their best to get into your system.

No problem, you might say, simply get all the Microsoft automatic updates and use good security products and your problems will be over. Yeah, right !

In addition to Windows updates the antivirus and security software suites rely on frequent updates, patches and fixes to maintain their defences. This may mean that a dial up user goes on line and half way through downloading his email the antivirus has an update to install so it stops the email scanning to update itself. The result is a dropped POP3 session requiring a restart of the email client and another download of all that stuff you were part way through receiving. Oh well, at least I know my spam has been filtered with the latest virus signatures.

Internet Explorer has stopped working again, and I see the Trend Micro PCCillin icon has vanished from the systray, so an update of something has broke that. Does this mean I have no security now ? I have two other browsers (and another operating system) to go at, so life goes on.

The more I think about this the more I am convinced it can't continue. I cannot live with an Operating System that is dependent on frequent updates to keep itself safe - the result is just too unstable.

Equally I can't be doing with Internet Security products that slow the machine down noticeably and break themselves and other things with monotonous regularity. A customer spent £60-odd quid on Norton 360 and it doesn't auto-update, so it declares itself insecure and spooks the guy - LiveUpdate appears to be broken and there is no fix available. Are Symantec a bunch of total Fuckwits ? selling a security product with a broken updater is perhaps worse than selling a vulnerable operating system that is dependent for protection on security products.

So try buying a PC without Windows - you can forget an HP, Acer, Samsung, Sony or Asus for a start. All of these will ship desktop or laptop retail PCs only with a Windows OS installed and paid for, even if your first act will be to format the HDD and put a Linux CD in the drive. Unbelievable.