The wireless community broadband network serving Wennington (Wennet) is looking forward to increased connection speeds as they start to take advantage of a "Digital Parish Pump" in nearby Wray village :- 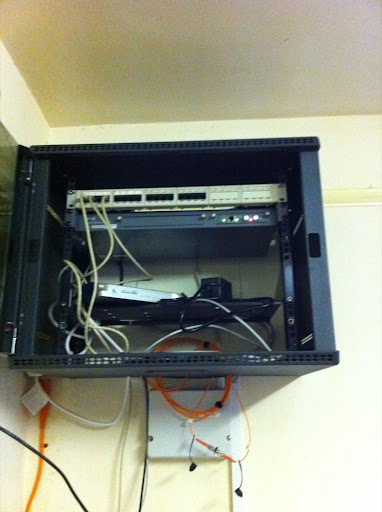 The feed was contractually 2 Mbits/s symmetrical (same upload and download speed) but in practice could burst to higher speeds. The first wireless link to LUNS was carried on a public sector educational network CLEO which has recently been transferred from LUNS to a BT-led consortium that has indicated that it will only guarantee to supply service until February 2012. Technical changes have also reduced the burst speed to the contractual 2M limit which has reduced the service quality for residents and businesses.

Wennington is therefore faced with a challenge of replacing their "middle mile" internet feed, increasing its capacity to handle more users with increasing usage, and upgrading their wireless network internally to escape the constraints of 802.11b.

A potential solution has appeared in the form of a "Digital Pump" facility kindly negotiated with a Lancaster University Network Research & Special Projects Unit project in nearby Wray. This project is an extension of the University's NRSP Living Lab rural broadband project into the arena of television over the internet including P2P broadcasting. As part of the project an increased capacity feed into the village was required and the project has procured a WEES fibre connection from BT Openreach to connect the village to the university at 100Mbits/s, over which 20 Mbits/s of internet transit will be carried for Wray village.

It is the presence of this fibre and the ability to add a further 20M of internet transit to it that has provided a way forward for Wennington. With the £10.4k pa cost of the fibre already absorbed into another project the internet connectivity becomes available at £6,000 pa for 40 Mbits/s at 5:1 contention. £500 per month ( £12.50 per month per Mbit/s) is the sort of figure that a community network of at least 25 users has a chance of affording and the extra capacity will allow more subscribers in notspots to be brought onto the network bringing in extra revenue. Initially 20 Mbits/s will be purchased for Wennington and 20M for Wray.

The "Parish Pump" costs £6,000 pa for a low contention 40M internet transit plus £10,400 pa to rent the BT fibre in the "middle mile" 12 mile run back to the University network centre. This latter charge is distance related, and would be twice as much to reach out to Wennington directly. In the case of Wray a £7,500 "excess construction charge" was applied by Openreach on top of the 2 * £975 installation charge - this covers costs above those allowed for in the standard price.

For comparison a BT leased line of 30 Mbits/s on a 60M bearer was quoted at £64,000 pa with an initial cost of £76,000. So the Digital Parish Pump is providing 40M for less than one third of the annual cost of a leased line. An additional 40M would cost less than £6,000 pa using the existing and paid for fibre, showing the benefit of having a broadband supply point in the village rather than buying individual services from a remote point.

As part of the Digital Parish Pump service the users of the network are allocated an IP address by the University network services, however Wennington owns its own IP block and could equally use those once the appropriate entries were in the routing tables. Email and other services are used from "cloud" providers like Google Mail and no other services are included with the "raw" contended internet connectivity.

Now that the Digital Village Pump / Parish Pump is on stream a wireless link using equipment supplied and configured by NextGenUs has been established to connect to a nearby farm that is also served by the Wennington network. The link was installed by the local aerial installer and Wennet team members and paid for by Wennet CIC. Early work on the wireless routing and equipment options was done by the University under a commercial contract paid for from an NWDA Innovation award received by Wennet in 2008/9. NextGenUs did the final wireless survey and planning, with help from Google Earth and the local knowledge of community broadband volunteers.

Everything is poised for action now as two other users connected by fibre to the farm are enjoying the new service and a progressive rollout of enhanced wireless devices connecting back to the Digital Village Pump (DVP) via the farm is the next step. Plans are also afoot to dig a fibre optic cable to the DVP replacing the current wireless link to the farm - this will provide higher capacity and greater reliability.

Initial speed tests from the farm have exceeded 30 Mbits/s both upstream and downstream : The only cloud on the horizon is that the University's funding of the £10,400 pa fibre "middle mile" connection does depend on externally funded projects beyond 2011. Should that be in danger it is possible that Wennington's network could expand enough to carry the cost, providing the financial and voluntary resources are available to do the job in time.

In providing rural next generation access it is this "middle mile" that is often an insurmountable problem. Internet transit charges are low compared to the cost of extending that connection out into the countryside from a metropolitan data centre. Rented BT fibre circuits have an install cost and an annual rental price per end plus an annual charge of 36p/metre (£360 per km, £580 per mile) for the "main link" connection between exchanges if the two ends are not served by the same exchange.

Thanks to project members for the Skype interview and information on which this post is based.

Can a County Council manage ?

Reading an excellent article by Robert Dale I started to reflect on how the likes of Cumbria and Lanacashire County Council are handling their broadband projects with part of the funding coming from Broadband Delivery UK (BDUK) .

Both counties have EU public tenders out, currently viewable online Lancashire and Cumbria.

Robert says that "local authorities should make finance facilities available specifically for these communities to move ahead with their own broadband when and where possible" but I really don't think they are up to that task in the way they currently operate. I say this based on my previous experiences in the private sector where we managed a capital investment programme of £20 - 60 million per year. It may be helpful to compare the approach taken.

I worked in a multi-site manufacturing company where we made investments to increase profitability through cost reduction or new products, invested in replacement works for equipment at the end of its life, upgraded facilities to meet new regulatory or other standards, and so on. There was active competition for the capital funds from the factories and we could have easily spent double what we had allocated by the Board of Directors. The administration involved a handful of people with a larger committee of technical and financial gurus joining senior line managers to argue out which projects were funded, canned or deferred. We'll call this process our "Capital Expenditure Committee" or CEC.

In the Broadband case we could cast BDUK as the Board of Directors, or maybe the County Council or its Chief Exec, setting the size of the budget. The officers of the Council could be equivalent to our CEC. If they were they would probably divide up the money into categories - for example Broadband notspots, Village pump pilots, FTTH pilots, Improved mobile broadband coverage, etc etc - and invite people to make submissions for funding. However they can't work like that, because they don't have any "customers" for the capital projects like we had factories.

In our case when a factory bid for funding and won it then they would procure the engineering and other services to deliver the project. Some of the resources may be their own labour, others would be bought in. The Factory Manager had responsibility for delivering the project on time and on budget, and was also effectively the "customer" of the CEC process in getting access to the money. Their submission for project funds would typically have to include detailed costings and supplier tenders at the later stages, we had 2 - 4 stages of application over 18-24 months depending on size and complexity of project.

The County Councils don't appear to have any customers. There isn't a mechanism in place for a community leader or broadband champion (equivalent to my Factory Manager) to ask for money from one of the pots or to influence what gets delivered in their area.

What we see in practice is the County Council writing a tender that effectively outsources the whole intellectual project of managing the expenditure and delivering the benefits. The large company winning the tender, for example BT, gets to make all the decisions about what to do where. It is responsible for delivering what it says it will at the tender stage which means a massive conflict of interest where the suppliers of goods and services are the same people deciding the best way to deploy those goods and services. The end users and local communities have no voice in the process.

A possible approach to match what Robert calls for, along the lines of my previous experience, might look like this :-

1. BDUK and County Council / Chief Executive define available funds, priorities and goals of expenditure and sets total expenditure budget.
2. County Council decides how to break up the total into parcels of expenditure to cover areas of activity, priorities, geographical areas, etc etc.
3. Community groups, local small companies, 3rd sector bodies, County Council departments, District or Parish Councils bid for appropriate funds to do their project to meet one or more of the objectives. Let's call them project sponsors.
4. County Council officials, BDUK, invited experts form a Capital Expenditure Committee to award funds to the best projects to the Project Sponsors based on the case they present.
5. The Project Sponsors procure necessary goods and services to deliver their project and manage its implementation.

Would this deliver a better outcome than a single tender to a company with a turnover of at least £100m pa, as specified in at least one of the tenders ?

Let's try to illustrate the difference :- 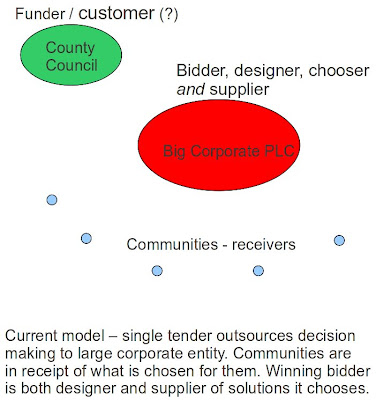 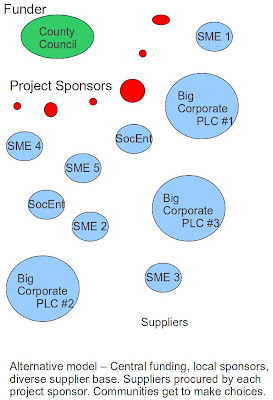